The Birth of Odin; Otherwise known as, The Baby That Couldn't Wait. 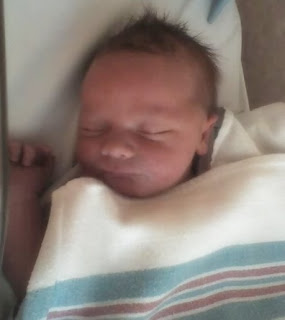 You all know that I've said I have quick births. Well even this birth went beyond what I was expecting....

I woke up Feb 11th and I still had a backache. I attributed the backache to the night before when we took the kids to Jokers. I stood up most of the time, chased kids, etc and was pretty uncomfortable. Not one single contraction though the whole time we were there. I went to bed early that night.

I got up at 5 AM to fill my daughters sippy cup so she'd go back to sleep. When I laid back down I noticed my back still freaking hurt. But I'm on an air mattress on the floor, so sometimes I sleep wrong anyway. I was able to fall asleep so it wasn't that bad. I woke again shortly before 7am when my oldest left for school and said goodbye. I tried to lay back down, but couldn't fall asleep. So I decided to get up, I posted here on the forum at 7:18am. When I stood up to go to the bathroom I had a contraction that didn't feel that great. It was the first one in days. A few minutes later another came. This time I had to stop walking. I decided to wake up my husband and I went into the bathroom to put some make up on and brush my hair. My husband asked me if he should call his sister and let her know not to go into work today. I said I wasn't sure yet. I wanted to sit down for a minute and see if they would go away. One contraction later, I told him to call his sister. He scurried around the house trying to get the girls dressed, and a bag with diapers, wipes, a sippy cup, medication, etc all packed up. I giggled at him once because he looked so cute being all frazzled.

I posted to the forum again that we were leaving at 7:52 AM. The road here was bumpy and it was really painful getting out of it. We drove to his sisters house and dropped the girls off. My 4 year old and 2 year old waved goodbye and were in really good spirits about spending time with 'Auntie". She said, "How are you doing?" when she walked by the car and I said, "No talking." I had called the school before we left the house and asked them to dismiss my oldest. We swung by the school that was very close by and picked her up. She was ready outside the school and both her and my husband ran back to the car. Contractions were really strong now. I was breathing through them, but finding it hard to keep my muscles loose and not tense up. I put the seat back in the car.

My husband got on the turnpike and got angry when the change thingy said he didn't have enough. He threw more money in and sped off. My daughter giggled at something, and I thought she was laughing at me. I whined "Please don't laugh at me." and started to cry. Then I realized.. I was in transition already, and this wasn't good. My labors are short. Too short for me to be in the car during this. I told my husband, "If I told you what this felt like, you wouldn't be too happy." he said, "What?" I said, "This feels like it does right before I push.."

My husband drove as fast as he could. I saw the speedometer hit 90 and even though I wanted to yell at him, the other part of me didn't care. My daughter had turned white in the back seat. Then I said, "Pushy pushy!" My husband begged, "No pushy! Hold on! Your water hasn't broken yet has it?" "No,... " and just at that moment, my water broke. "Uhh.. YES! Yes it did! Pushy pushy!" "No pushy honey!" 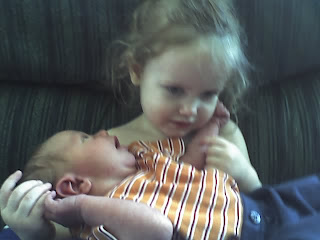 He ran red lights, stop signs, and passed cars on the left. Some UAV of a driver kept putting on his brakes in front of us to make a point.

We had our hazards on and even passed two state troopers going 45 miles over the speed limit and they didn't stop us.

I was trying not to push so much and holding the baby in, when he got to the ER and ran inside yelling, "My wifes having a baby!" I expected someone to come out, but no one did. Instead my husband comes back with a wheelchair and says, "Get in!" I looked at him and whined, "I can't! The baby is right heeeeeeeerrrreee!" but I sat down anyway, kinda sorta. Then a nurse appeared all calm and collected and said, "First baby?" I held up four fingers and said, "The baby is coming!" My husband ran through the hospital pushing me, my 9 year old running behind us. The woman yelled, "Having a baby! Coming through! Excuse us!" and I can remember people staring at me while I tried so hard to hold the baby in. I put my hand behind me at one point and felt the babys head right there full inside me.

There were nurses huddled together chatting, and looked at me as we ran towards them. One of them walked off saying, "I'll get the monitor.." and I yelled, "I don't need a monitor! The baby is coming now!" and I pulled the front of my pants down and the babys head came out, and his body right afterwards. My husband caught him before he fell down my pantleg, and the nurses stood there stunned. Someone ran over to slip the cord from around his neck, and they suctioned him and gave him oxygen. I guess there was meconium in the amniotic fluid, most likely because I had to hold him in.

I remembered to say, "My daughter gets to say what it is. Let her say it!" and as my husband put him on my chest, my daughter peeked and yelled out, "Its a boy! Its a boy!" and sure enough, it was! 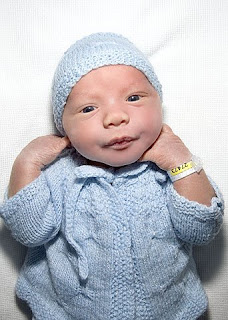 My daughter took a picture of us in the wheelchair. Our first picture.

A few minutes later my doctor walked in and said, "I heard someone in the hallway say someone was out here giving birth and I figured I'd check.. oh.. its you!" the nurse looked at her and said, "Is this your patient?" and my OB said, "Yes! It is!... and next time I'm inducing you! Wow!"

I ended up having a small tear, needing only two stitches. Odin nursed right away like a champ, and is gorgeous.

We are so in love with him.

We only stayed about 24 hours in the hospital. It was basically room service for us.

Every person that came into the room called him the Baby the Couldn't Wait, and Daddy nicknamed him Speedy. Even the cafeteria people knew how he came into the world, and people outside the ward stopped to say goodbye on our way home. LOL It was definatly a wild and crazy birth story, and not a part of my birth plan! I was going for a water birth! 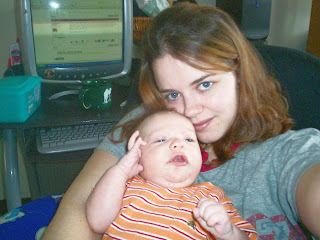 He's grown a lot since I first wrote this post and put it on my myspace page. I can't believe he's already two months old. Time really does fly by doesn't it?

The girls adore him, and I have to fend them off every day because they have a tendency to love him a little too much. LOL

At two months he is cooing up a storm and smiling at everyone and nothing at all. He looks so much like his daddy! Oddly though, he looks a lot like Piper and she looks like me. So we'll see...

He's finally not gasping for breath every time I take him outside, so we've been able to hang out with our new neighbors. Oh! Its been so long since I blogged that I didn't even write about our great move! Or Sierra coming back to live with me. (come to think of it, I don't think I even wrote anything about expecting baby #4 either. Well now you know!)

I'm getting to Treasure Mapping a bit late this year. Shamefully late really. But I have faith that it will help just as it did last year. Every single thing on there has come true. Everything.

I need to update more about the things that have happened here at a later time. I feel like there is a great time gap going on.