Look at how grown up he's gotten! In a few days he'll be a year old already. He's walking, running even. Lets see if I can remember some stuff..

Odins words: Mama, Dada, "I did it", thank you (which sounds nothing like thank you but trust me, it is!)and "Ivy." He loves his sisters so much.

Odins favorite foods: Frozen peas. Yes I know its weird. He absolutely loves them and refuses to eat them if I cook them! LOL A handful of frozen peas at his highchair and he's a happy baby for the next half hour. He also loves cereal with a little bit of soy milk on it, and pretty much eats whatever we eat. Peas are the favorite filler though.

Odins favorite drinks: Nummies! He's still nursing strong but Piper is beginning to wean. I think if I sat down more she would nurse more but she's three years old. I feel confident she has received the best she can from me and I'm ready to move on I think. Slowly we are headed that way with her in the lead as always. Oh yes, Odin. He loves to drink soy milk or apple juice from a sippy cup. He also loves to drink ice water from MY cup.

Odins favorite games: Run-to-mamas-desk-as-soon-as-she-gets-up-so-I-can-toss-everything-off-it game is his favorite! I have the pictures to prove it, I'll have to get them up soon. He loves to try to throw my coffee cup on the floor. He's destroyed three cups so far including a Christmas cup, my favorite pentacle cup from Salem, and one of the matching mugs we got from Acres of Wildlife where we went on our honeymoon. *sigh* Thats not one of our favorite games for sure. He loves to grab Daddys Mountain Dew bottle. Sometimes I'm going to get a picture put together of all the kids holding that mountain dew bottle. I know they've all done it. LOL

Odins favorite toys: Trucks and cars, electronics! (my cell phone, daddys cell phone, the PS3 controller..) He loves to play with his Little People too.

Odins favorite show: Yo Gabba Gabba hands down. LOL I think its everyones favorite show because its just. so. crazy.
Its teletubbies for the 21st century.

And now I bring to you.... Odin Christopher 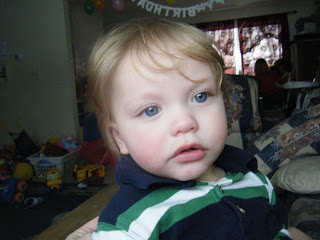 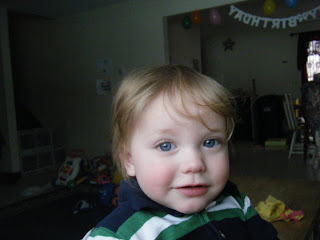 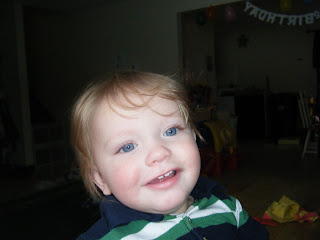