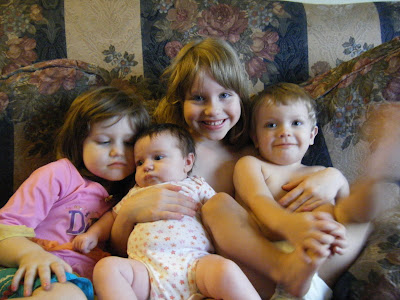 When you take a group photo of 4 kids six and under, its hard to get a good shot. Someone is either not looking, sticking their tongue out, wiggling too much, and completely out of the shot. This is the best one I got. I like it, even if Piper isn't looking. Again.

So Christmas is over. I know I haven't posted pictures of it. I will. But the tree is already down. I couldn't take it up anymore. Which makes me sad because I remember how much I loved the lights hanging up year round at the farm. I would stare at them and squint my eyes up, and wiggle my head back and forth. I'd watch how the lights would spin when you closed your eyes halfway. How they colors could all swirl into one. I'm not sure how no one knew I was autistic back then. Even to me looking back its pretty obvious. Oh what the power of the internet and google could have done 30 years ago! It would have made sense to my endless spinning. Even when I got older and played with my cousins, I'd manufacturer games that involved spinning. As I watch my daughter interact with kids, I cringe knowing thats how badly I interacted as well. I was bossy and demanding. I know why. I needed them to play the way I was playing because I already had it in my head. THIS was how the Barbies were going to play today. They had boyfriends and they were going to watch and movie. And pretend I said that I loved him. Pretend I was here. Pretend I was there. No! No! Not there! HERE! Uggghhhh over HERE! .... I didn't care what they wanted to do. I didn't like their ideas because I had already written how the playing was going to go. It was already in stone. You can't change that. ..... I watch my 3 year old struggle to play with Ivy because she wants to use her own ideas, and Ivy will have none of that. I've become a broken record; Let your sister play the way she wants to play Ivy. Let her use her own ideas please. Ivy stop telling her what to say. .. Eventually Piper gets tired of it and wanders off to watch tv, which of course leaves Ivy absolutely angry beyond belief because SHE WAS PLAYING!

I look at the picture above and I can see it. I love her to death, and the picture is adorable! However.. her arms are around both the baby and Odin, because then SHE is the one in control. I know her reasons. It helps to control the chaos in her head. It gives her consistency and helps her to know whats happening if she's the one calling the shots. But to others it appears controlling and bossy. And it often leaves Piper out..

One of my New Years Eve things this year... I can't think of the word I'm looking for. Promises... um...oh! Resolutions! One of my resolutions is going to be to make more time for Piper. To pay attention to her more when she talks and grabs my arm. She's the middle girl and she tends to get lost sometimes I think. I don't want that. I want her to know I love her and she's every bit as important as Ivy (chris and my first together and the one with special needs) and Odin (the only boy) and Persephone (the baby) and Sierra (the real oldest but different kid cause she has two homes) .... Piper just IS in all of this, and I want her to feel special too.