Piper on her way to Preschool; big 5 year old now 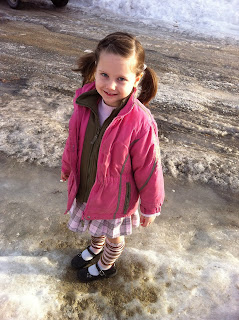 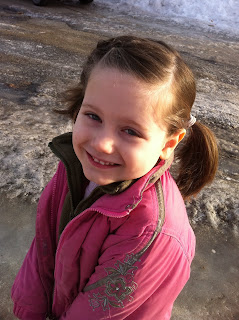 In impromptu "Hey! Stop for a second!" while we were on our way to Mothergoose Preschool at 7:45 in the morning. She dressed herself and wore a pair of striped Babylegs with her outfit. I thought they looked so cute that I snapped a pic of it. Its hard to believe my baby girl is 5 years old already. Where have the years gone? Yesterday she cooked a bagel by herself. Pretty soon she'll be driving a car. It happens so fast!

Some quick facts: Two months ago at almost 5 years old, she was 47.6 pounds and 43 inches tall. She's built just like Sierra was/is :) Tomato and dairy we've figured out, cause her eczema to get worse. Its itchy, and right now its pretty bad. Luckily for her right now its on her bottom and her legs and not her face. (though Persephone has a patch on her face) Her favorite foods are Ramen noodles, chicken, and more Ramen noodles. That girl could survive on noodles alone! She's not big on desserts just like Odin though. (Ivy is another story entirely) Her favorite game is Pixie Hollow on the computer, and her favorite things to play with are Tinkerbell toys, Strawberry Shortcake, computer, and her American Girl doll.

Piper's teacher says she's doing wonderfully at school and that she's very independent. She doesn't whine or cry at school the way she does at home. So most likely she does it as a way of gaining attention. And trust me, in a house where biting 7 year olds get the most attention, 3 year olds that throw toys and don't talk much, and 16 month old babies with no words that just scream DO get more attention than a quiet well mannered 5 year old. I can see the allure to misbehave there. She's a lot like Sierra was. ;)

Her independence has been held back a bit due to Ivy. Inadvertently we don't let Piper do some things that she can probably do, because Ivy isn't ready to do them yet. I know the time is coming that she's going to pass her sister and its difficult for us to figure out how to let that happen.

Already she's allowed to pick up Persephone, but Ivy is not. Its purely a safety issue. Ivy trips and falls and really just has no awareness of her body in space. If allowed she would run and climb and jump while holding the baby. Obviously she can't do that. So we have to be right on her about it. She does get a time out if she repeatedly doesn't listen and keeps picking the baby up. As long as Piper is just holding her, or moving her from one place to another (if she's crying or in an unsafe spot) she can be trusted to do that. Sometimes she gets too silly and we tell her to keep her hands off her sister, or to put her down. In general though, she's very good with her.

She doesn't have the issue with impulse control that Ivy has. Thats the first real thing we've been dealing with that doesn't "feel" fair. I want Ivy to be able to pick up and carry her baby sister around, she's almost 8! She should love babies! I know I did at that age, and my heart just breaks that she can't do all that holding and mothering that I know I wanted to do. Then again, maybe she doesn't have those same feelings?

Actually, looking back I can see why I shouldn't have been trusted with kids. (yet I was) When my younger cousin Matthew was a baby, I once bit him so that he'd cry.. so that I could make him feel better again. His smile was so cute when he was happy, and the feeling that I had when I cheered him up and made him stop crying was so happy inside my heart! I remember feeling proud and excited that I could do something so special. So one day when he was happy just playing with me, and he didn't "need" me to cheer him up and "Shhhh" him and pat him.. I tried really hard to make him upset, so that I could make him feel better.

Doesn't that sound like something Ivy would do? Yep. Exactly like her. LOL The reasoning was sound to me. And I can remember not understanding why people were angry with me. It made sense to me. I was confused a lot. I stared at blinked at adults, or cried. Ivy and I are so much alike its scary sometimes.